This blog has become the place where I put my opinions...and share my interests in our place in time and space.

Fellow blogger Kate Morales, suggested blogging about the whole week. I like journaling. And I'm at a starting point (they come occasionally when I go away and return home, or have been sick and get well again, etc.) 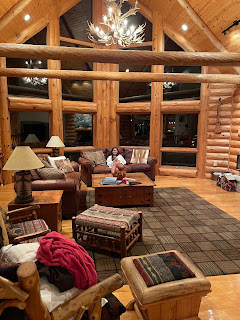 Returned from cabin, which meant lots of packing up and dismantling bed linens, following the B&B protocols. Took son T. and wife K. to the airport on way to Colorado. They stopped first with me at my apartment in Black Mountain NC to unload all the stuff from my car. I had been really handicapped at climbing stairs or carrying much over the weekend gathering. By Mon. night my back was screaming. (Note to self, don't complain about all your physical woes in this journal!) We had to get up really early to clean up cabin and get to various places of travel, so after I got home from the airport, checked the laptop, I took a nice hour's nap. Missed being around people SOOO much.

Finally texted a couple of friends to let them know I was home. And then called another friend, Cathy, and asked her to have dinner with me at Ole's (favorite of mine). She finally said yes, and it was so great to be able to talk with her...I've decided conversations are the glue which keeps me sane. 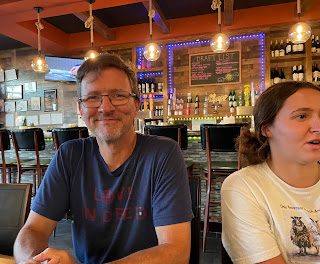 Today is R, (my second son's) birthday...mid-50s. Blogged about how wonderful he is as a son, as a man, husband and father...as well as very accomplished in his work. I need to remember to call him later (and have a conversation!)

Walked up the hill driveway, then back down the stairs...to get used to those muscles which complained all weekend. Also met 2 neighbors and had short chats. (does that count as conversations? I don't think so.) I used my walking stick, but didn't lean on it like I had over the weekend. Perhaps that difficulty was from having to move all the food stuffs into the car on Friday before we left? Muscles all over my body don't feel half as bound up as I was over the weekend. (Oops, forget physical gripes!)

Washed half the windows...the storm doors and living room ones. The nebulizer I use with saline solution had fogged them all up on the inside. I could wash most of the outside of the storm windows, but not the part behind the screen. Anyway, next to do is bedroom and bathroom windows. Don't hold your breath.

Had a picnic circle lunch with 3 other friends up at the campgrounds in Montreat NC. Sitting by the creek, I've become so accustomed to it that I didn't even try to take any photos today. Shared a bit about all the people and the weekend, my shock at being alone again, and my determination to have connections/conversations with other people going forward. I'm also treating my household chores as a bear just sauntering through the woods...whenever I see something I like and want to work on, I do it...then move on.

I was confronted with another neighbor also wanting to have a conversation. She parked her elec. wheelchair on the front porch by the driveway. I was getting something out of my car. I asked what she was waiting for. She said somebody. I said who? She said any body, just somebody to talk with. So when my friend came to pick up her forgotten items from my car, I asked if she would like to talk with my neighbor, which we then did for about 20 minutes. Sort of spreading the joy!

Did laundry at laundromat...uneventful. Brought laundry into house, cleaned out cooler I'd borrowed for the weekend, loaded it with a dozen left-over eggs, and prepared to take it and the Monopoly Game back to my friend, T's house when she got off work. She texted she was home, I started driving toward her.

Had an accident. Wasn't hurt, nor the other woman in her car which I hit. I had been turning left into a 4 lane highway, and a big black SUV had been  slowly coming toward me, turning right into my road. So I didn't see the car behind the SUV, and then bang, I hit the back door of her car...knocking her car into the oncoming traffic lane. I had just been starting out, and hadn't gotten out of 1st gear.

That's how my right arm has all the bruises that I suffered, from holding the gear knob as I suddenly stopped. I was able to drive my car over to the center turning lane behind her car, then got out and called 911. There was an off-duty policeman from Black Mountain who stopped first, then a fire truck with EMT's and I and the other woman refused to go to the hospital. She was talking on her ear bud phone constantly in Spanish. . I had asked the EMT to take my blood pressure since I've got high blood pressure, but it was kind of normal, considering. Definitely not the level to go to the hospital. 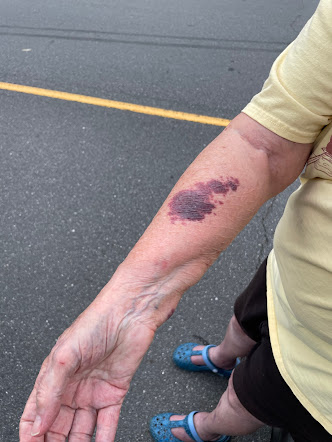 I then texted T, and she came over and parked in a nearby parking lot...which we all ended up driving to for the police to do their report. My friend took her cooler, and the eggs, which didn't look broken even! She gave me a ride to my apt, about 3 blocks away.  My car was towed because the front bumper was against the wheel. See photo.

I also emailed my three sons and wives with photos. No answers. I called my two other best friends, as well as the one I had planned to meet Thurs. night for a story telling performance. She offered to help also. Everyone is great at offering rides etc.

Didn't sleep very well...kept having the crash and afterwards go through my brain, going to sleep, in the middle of the night, then at 5 am. I took Tylenol for the pain in my arm...looks just bruised, everything works ok 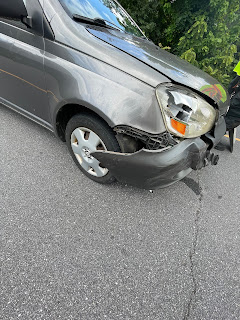 Wanting to know what the next right thing to do is...

Called Tim, friend who knows about cars. He had no experience with body work or accidents. Called around to 1) my mechanic who sent me to 2) a body shop which has no appointments till Dec. and 3) the place where the car is, an impound lot. They won't release the car to anyone until insurance sees it.

I had called my insurance agency last night when I thought my insurance should be notified. The tow truck had not been sent by them, but by the police (my guess).

And the accident report also was written in error with my old insurance co. on it.

That was because the registration card has the old co. because I didn't change insurance till after I'd registered the car. I gave the police officer the card for the new insurance, but he must not have noticed it wasn't the same. That may be a problem as far as notifying my insurance...but my broker who sold me that policy took the accident number and was going to notify them, and then said an insurance adjuster would look at the car within 3 days. I don't expect that over the weekend.

Then my old insurance co. called (last night) because the other car's insurance had filed a claim against the policy that I'd terminated. I explained to them that I was insured by another co. and the old one said they couldn't tell those details to the other insurance, but they could give them my phone number.

A friend picked me up to go have lunch with the people who sell pottery at the Tailgate Market on Saturday mornings...and a relative of one of them. That made 5 of us for lunch. It was outside in a lovely setting, and I brought home half of my meal for later. My friend had purchased some figs for me, but they were over ripe, so some turned to juice before I got them home.

Dealing with stress...or just wanting to relax in a different way, my friend and I went to the ABC store and each of us bought some liquor. Then she brought me home and I took a nap.

Later I made a delicious dinner of Ciabatta rolls (warmed) with cream cheese, Tzikie Spinach Yogurt, and the smashed figs. Wow...everything from crisp bites of garlic to sweet figs! I was about halfway through eating them and my son T. called to see how I was doing after the accident. I told him fine, some bruised arm places, and waiting for insurance to tell me the bad news. I'm kind of resigning myself to it being "totaled." That means finding another car without having one to drive around in! Geese! And these days used cars are really dear...and priced accordingly!

This has definitely been a week to keep a journal. Many of my weeks will not have this much happening! Today nobody offered to take me to church, so I will gladly watch the YouTube video which was created. Love YouTube! A friend did offer me a ride while she went to Ingles grocery to pick up cardboard milk cartons, which she uses to carry pet food to the local animal shelter, from where it's offered free. Anyway, I went in and bought a sweet potato. I've got fruit aplenty now. Need to cook the left over mushrooms from forgetting to take them to the weekend gathering.

We went to sit by a lake she likes, and found the clouds had made most benches shady, and many ducks and even an egret were visitors. Now I'm home and preparing mushroom stuff.

Tomorrow I may hear from the insurance guy as to what my car's future will be. Fingers crossed they will let me fix it...it's been such a reliable little car! But it's a 2004.

I'm sharing this through a link over in https://abbieandeveline.com/ post tomorrow. Hope some others will join us, even if they don't have quite as much excitement as I have this week. I hope I don't either!

I do love seeing all your comments.Thanks. And I will make some notes after them, in case you, or the next person, reads them!

Barbara R.
Hi, welcome to one of my blogs. I'm proud to be a senior, retired from a multi-faceted career life, and happy to be a mom and grandmom. I'm currently living in NC mountains. I acknowledge this wonderful land supported native tribes long before western Europeans arrived. I hope to steward the land for next generations.. 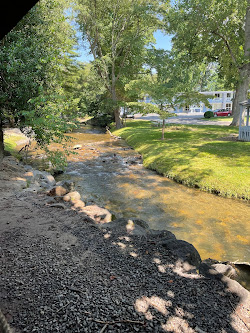