Just some ramblings of mine

I woke up late this morning...well, I decided to let myself go back to sleep because I could. Retirement lets me do this a couple of times a week.

And that's when I dream.  Today it was delightfully involved, but fleeting in memory. 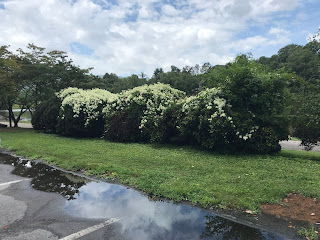 Then I read a few poems, here on blogs, or as newsletter in my email. And in between the lines, I kid you not, were fragments of my dream.

It was as if the memories were triggered not by the meanings of the words I was reading, but by the space in my head that enjoys poetry. It's probably that creative place, where dreams, sculpting, and poetry all merge.  I am serious. This experience was delightful, so I read more poems.

And the dream was how I had a neighbor who had hired a catering crew in a food truck, to do a wedding reception I think. The neighbor lived in a house next door (not next to my apartment now) and the food truck people (4-5 of them) needed a place to sleep until the next day when they would be cooking.  I met them, and showed them a menu that I'd picked up in Gainesville FL, where they were from, and even had that experience of meeting one and hearing her name, then forgetting it and asking what it was again.  The rest of the dream had to do with finding beds and bedrooms for them all, and apparently I was magical in creating spaces for everyone.

And then in Browning's Sonnet #43, between those familiar lines, and a couple of other poems, which had beautiful wording...slipped the dream back into consciousness. How do I Love Thee, Let Me Count the Ways.

Speaking of consciousness, I'm reading Blink by Malcolm Gladwell, and enjoying his concepts of adaptive un-consciousness, and talking with all my friends about some of the experiments that psychologists and others did, which were included in the book.  They know I'm creative and interested in exploring all those things about the mind.

When pottery students sit around a table working on their designs, we pondered the difference between mind and brain!

The geese coming at me...imagine doing chair yoga on the second floor of the Lakeview Center, looking out at Lake Tomahawk.  Then against the backdrop of mountains in the distance, suddenly about 20 Canada Geese are coming right at me, as they change from v-formation and plan to land.  They don't all come straight down, rather turn in one direction or another to flap wings and slow themselves before they gently splash down. I stared at this phenomena rather than tilting my head as I breathed deeply. In the space of half a breath I had a transforming experience...looking into the eyes, wings and huge bodies of these creature of air, land and water. I won't forget it.

Looking forward to hearing from you! If you think sending spams out to the universe is fun, try looking in the mirror. You're weird.