Women training on the job

Training on the job! 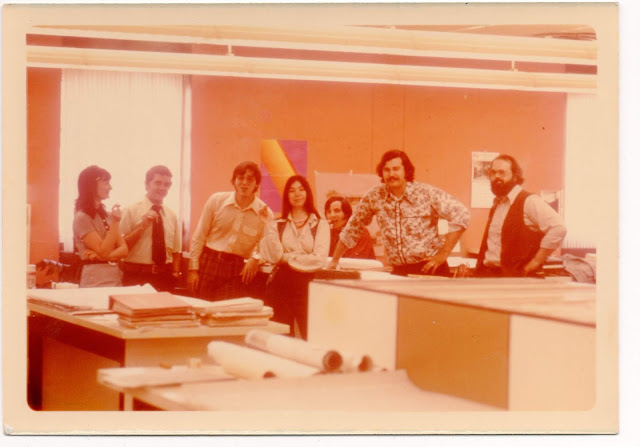 When the man in the floral shirt had a first baby (well, his wife did) he passed out cigars to all the draftspersons.

I'm on the far left, not smoking the smelly thing, but holding it for the picture.

The other woman in the photo with long hair, had just graduated with a degree in Architecture from one of the Florida universities. I had had 3 years of liberal arts college and 2 children and a divorce by that time.  Little did I realize I'd be going to the U of FL myself in another 8 years myself!

The drafting room of an architectural and engineering firm had mainly men working in it.  Stephanie got her position by getting a degree.  How did I get mine?

A year after my divorce I was a secretary in a cable TV firm...which in 1971 meant that cables were just being run between phone poles for the first time in Tampa. There were some electrical engineers who worked on drafting tables, and I was sitting at an IBM Selectric typewriter, wanting to find a way up in my career, which seemed destined to include typing.  Then I decided to apply for an apprenticeship for an electrical engineering draftsman at another firm.  I got the job...after all, I knew the symbols, could draw (I had been an art major) and looked pretty good sitting on a drafting stool. I kid you not.  I'm positive my legs were part of the package. (Sorry ladies, I was not totally liberated yet!)

After a few months of this, I decided if I could apprentice for the electrical draftsperson, why not an architectural one? So I did, and went to another company and got that job.  I did it for a few months, then wanted a better position, which is how I ended up 3 years at the firm seen in the photo.  I moved up while working there, by starting to draw plans for landscape design and for interior finishes.  The firm only worked on commercial projects, like banks, post offices, and schools. Some government contracts required landscape designs...which were easy enough to draw. I used a book about plants that would grow in Florida. I knew very little otherwise.  I was told it didn't matter, because the contractors would replace my design with whatever they had on hand anyway. And the firm I worked for got a drawing that looked almost as good as one a real landscape architect would have made...much cheaper with me! (Sorry professional landscapers!)

And for interior finishes, I used all the samples that were sent for flooring, and Formica finishes for bathrooms, and floor tiles, and paint samples and carpet samples, to build little dioramas, so we could show a bank (for instance) what a color scheme for the bathrooms might look like. My favorite was doing a board room for the top floor of a 36 floor building that still stands in Tampa.  When it was built it was the tallest building. I never found out if they used my presentation choices or not.  It didn't really matter.  I got a business card with my name on it saying Architectural Interior Designer. We also got a contract to renovate the Tampa stadium and locker rooms...so I again had some interior choices put together for it. That stadium got demolished and a bigger one built years ago. (Sorry to the professional interior designers!)

Then I quit.  I wanted to take a summer off with my 2 boys and travel in my camper van (my only means of transportation). I had proved I could do many things, and had a gas credit card...so we traveled all over the country camping, and then we settled in another city. I started as a temp secretary first...then worked my way up in different jobs.

I didn't return to drafting.  But one of my temp jobs was at the new school of architecture in that city.  I unfortunately couldn't consider becoming a student yet because there were course requirements that would mean "pulling an all-nighter" and I knew as a single mom I wouldn't be able to do that.

So that's how I ended up as an apprentice that became a draftsperson that became an Architectural Interior Designer. I felt a bit bad because people were going to college learning all kinds of things to be interior designers, or they worked in antique or furniture stores so they knew all kinds of things about furnishings.  I could do finishes for board rooms, post offices, schools, hospitals, and bathrooms!

I guess I learned that the college degrees that I got prepared people for more than just a skilled trade. That was many years after I'd worked for them.  In the meantime I also knew that training on the job (apprenticeships) are excellent ways for intelligent people to accomplish a lot. 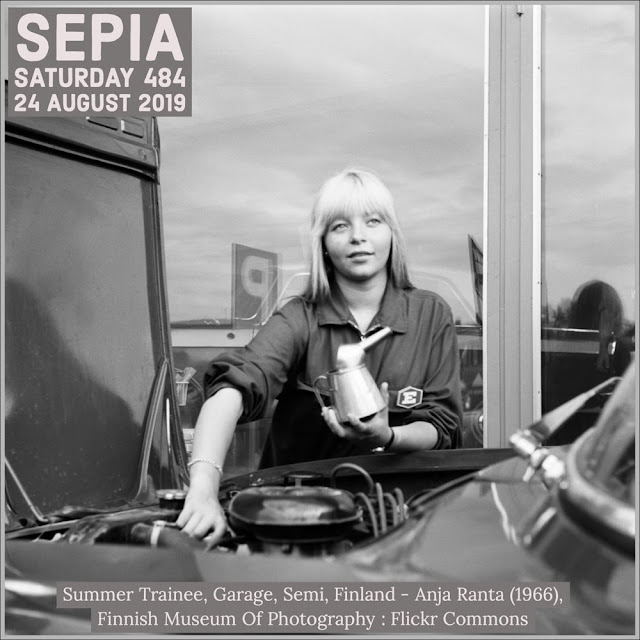 Our Sepia Saturday prompt this week shows a young woman working on a car (with nice clean hands and even a bracelet!) But come on over to see what else this might inspire others to post. And you are welcome to join the crowd too!

Posted by Barbara Rogers at 1:30 AM

Looking forward to hearing from you! Sorry, if you don't have a Blogger account, I won't be seeing your comments, nor any "anonymous" comments any more. (It's easy to open an account, and then be able to comment on any blogs!)

Here I am at Alchemy of Clay 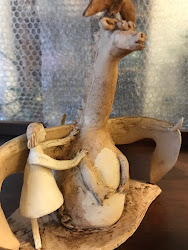